Hello, it’s nice to be with you again, we shared some time together a few weeks ago chatting about prayer. For the next few weeks I am going to be talking to you about another subject, Leadership.  I’ve written a book on this subject and it’s called ‘Leadership and…’


I wrote this book for anybody and everybody, so far it’s sold very well and it’s on its third re-print.  The problem is a number of people have said to me, ‘I’ve seen the book but didn’t buy it because I’m not a leader.’  I think perhaps I should have given it a different title.

The thing is, from God’s perspective, he has called us all to be leaders.  Yes, that means you, even though you may never have thought about being a leader until I just said it.  I watched a programme today on TV, there was a discussion on whether or not it’s okay for women to be in leadership.  Obviously it was one of those theological type discussions.  I was puzzled; I thought that in the body of Christ that there was neither Jew nor Greek, in other words our earthly citizenship type does not matter, our ethnicity has no bearing in the new kingdom. Neither does our gender, as there is neither male nor female, we are all sons.  This is what Galatians 2 verse 26 to 29 says

26You are all sons of God through faith in Christ Jesus, 27for all of you who were baptized into Christ have clothed yourselves with Christ. 28There is neither Jew nor Greek, slave nor free, male nor female, for you are all one in Christ Jesus. 29If you belong to Christ, then you are Abraham's seed, and heirs according to the promise.

So we are all sons of God. That might sound funny if you are a female.  But don’t worry, the men have issues to, we are also called the bride of Christ.

Some of our words just don’t quite explain it accurately when we are talking about the kingdom because we are trying to use concepts that perhaps don’t apply in the new kingdom of God dimension.

What about the leadership angle that I just mentioned and the fact that perhaps you didn’t even know you were a leader?  1 Corinthians 6, 1-3 says 1If any of you has a dispute with another, dare he take it before the ungodly for judgment instead of before the saints? 2Do you not know that the saints will judge the world? And if you are to judge the world, are you not competent to judge trivial cases? 3Do you not know that we will judge angels? How much more the things of this life!

What this is saying in simple terms is that the saints are called to ‘rule’, ‘judge’ or to use my word, ‘lead’ because that is what leadership is, judging, discerning, ruling and everyone is called to do that in the world to come so perhaps we had better get into practice.

God has called us to be many things, prophets, priests and kings to our God.  All of these are leadership based and that leadership preparation does not start when you die.  Here’s the thing, we need to learn and understand how to be good leaders, we need to start learning now and that includes you.  All of us are sons and all of us are called.

I have a friend who leads a church community who often receives requests for the leadership team to visit conferences and the like, I asked her, ‘How do you decide who you will send?’ Her answer was funny but appropriate, ‘I send anyone from the community who is willing to go, the whole church is full of leaders.’  Her answer says it in a nutshell, we are all leaders and you are one of them, God the father makes us sons, prophets, priests and kings no less. 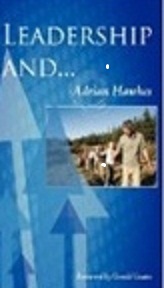