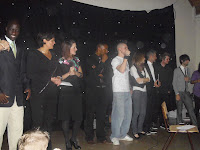 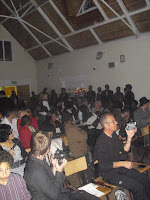 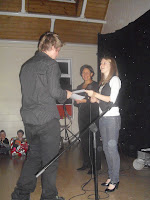 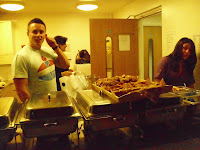 The independent schools we run always hold an annual end of year banquet. This year it was held on 23rd October, is that very late or very early? A few of the staff had been on maternity leave, and in order that they could attend we avoided June.

There were approximately 120 people there, staff, students and friends. We enjoyed a wonderful meal supplied by the Curry Leaf Sri Lankan restaurant in Turnpike Lane.

The Nursery and ABCs class presented their Space Programme. The Beehive Junior School sang songs they had composed; which they will shortly be recording to a CD, supported by Alex Greg, their Supervisor, teachers and music entrepreneur!

We have been running independent Christian schools for almost 30 years. Today, I am more convinced than ever of their value. The banquet this year was especially pleasing to me, alongside the usual awards for ‘Most Work Done’, ‘Best Athlete’, ‘Students with Highest Marks’; I also had the privilege of presenting ICCE certificates, for successful completion of their examinations, to seven students in the 11-16 age range.

The General Certificate was awarded to six students, one of whom was only 15. One student completed the Intermediate Certificate giving her passage to her chosen university; the other successful students chose a variety of options including continuing their studies at A Level or remaining at our sixth form further education unit ‘Base 6’. One has decided to work for us and is now employed by us.

The ICCE Examination Board issues qualifications that match the General level of the Cambridge International Certificates, according to NARIC (Nation Agency Responsible for providing Information advice and expert opinion on vocational and, academic and professiononal skills. As the National Agency, managed on behalf of the UK ZGovernment, we provide the only official source of information on international qualifications to organisations), the Government body that quality checks alternatives to GCSEs and other examinations.

The reasons for today’s blog are multiple, first and foremost because I thoroughly enjoyed the banquet; superbly organised by our top flight administrator, Angela Kelly. I must also mention our senior students, who set to with a vengeance and successfully set up all the technical requirements. One of the banquet attendees, who is not part of the school said, “It’s so encouraging to see your students taking on responsibility with such reliability and integrity.” That was good to hear, a fundamental aspect of the curriculum is character development.

If I’m totally honest, a key reason for the blog is to redress comments that people make about our school, one being, “It’s a nice school, but of course the children can’t go on to university as the qualifications are not good enough!” But here is solid, further proof that such comments hold no weight.


I was an excellent day; I spent time with some great students and we all shared in the joy of rewarding them for the completion of a year of hard work. Our schools and nurseries are almost at capacity, and we would love to expand to enable more of you to entrust us with your children’s education. Then perhaps next year, you will also join us at our year end Banquet.